Just added to your cart

This gem of a book is a relatable and honest collection of life lessons by Bob Lonac, a former executive of Crista Ministries, Young Life, and IJM.

Real-life stories that prove how present and active God is in our lives. 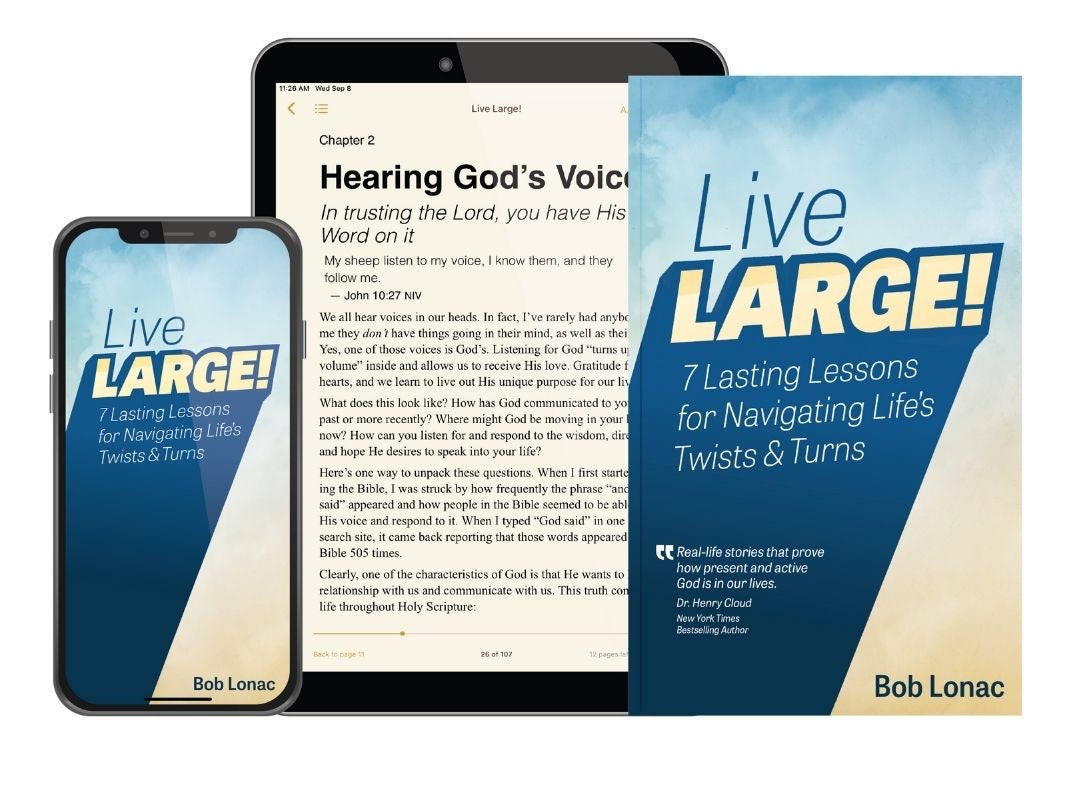 Live Large!, is a must-read if you want to know how to lead in challenging circumstances, navigate life’s most difficult situations, and find a path of joy in the midst of it all.

Bob’s vulnerability makes his stories both relatable and encouraging.

Live Large! highlights a pathway for each of us to develop relationships that allow our lives to flourish.

Enjoy A Fresh Dose of Encouragement

Live Large! is an authentic collection of real-life stories. They'll capture your heart and inform your mind with practical lessons to navigate difficult situations.

This book is for everyone searching for God's presence in midst of mundane, sorrowful, and joyful times.

Order your copy or preview the first chapter.

Someone once told me that you need to learn from experience, but it doesn’t have to be only your own. And boy, have I had experiences.

In Live Large! I share seven personal moments where I felt God change my life. Some lessons were harder than others and some were painful, but each has brought me closer to the Lord.

My hope is that you’ll find a piece of your own story and rediscover God at work in your life.

Available in Paperback & Ebook – On Sale

This Book is Written For You (& My Family)

I have learned a lot along the way. Now I want to leave behind the most important lessons for my family — and to you — in Live Large!

But, I don’t want to simply tell you what happened. I want you to go with me on the journey, so you can experience the story for yourself.

Practical Exercises With Each Chapter

Each chapter tells the story of a powerful moment where I clearly felt Jesus at work in my life.

I lay it all out there (joy, hardship, failure, and triumph). And, I recommend exercises to help you reflect on God's work in your life.

What I love most is experiencing Bob's wonder in the miracles of God and then personally receiving a fresh dose of encouragement so I never settle for less than living my life large.

I am so grateful Bob has taken the time to write down lessons from his many years of leadership and service and I trust there will be many who benefit from his wisdom and candor, as I have through the years.

Through the adventure of his own life, Bob calls people to live unafraid, increasingly attuned to hear God’s voice through trials and joys.

Why I Wrote this Book

For my thoughts are not your thoughts, neither are your ways my ways, declares the Lord. Isaiah 55:8

I wrote this book for my family. (The immediate members are 20 people large, and counting!) I also wrote this book to share my experience in an honest, real, and approachable way. My hope is that it is faithful to the Lord and helpful to you.

I didn’t grow up in a Christian house. We never talked about religion or the other important things in life.

The summer of my junior year, a Young Life leader by the name of Bob Runyon picked a few of us out of the crowd to help open a Young Life club. He showed us a movie about a camp called Malibu in British Columbia, Canada. It had girls and water skiing. I remember thinking that since I lived in America, I qualified as a Christian, so I was all in. That week changed the course of my entire life.

In this deeply personal book, I look at the hard, the amazing, and the downright shocking lessons I’ve experienced.

Will You Join Me?

I want to take you up into the Jervis Inlet in western Canada, where I was hoodwinked into participating in an exorcism of a demon from a teenage girl who could bend spoons with her mind.

I want to take you to the wind-swept plains of western Kenya to help me try to figure out how I ever became a Maasai elder.

I want you to meet a young man who showed me what heaven must be like. He went there and came back. I’ve got the goosebumps to prove it.

In each of these stories, my hope and prayer are that you’ll find a piece of your own story and rediscover God for yourself, as if for the very first time.

Today, people call me a leader of leaders. But this wasn’t always the case. I was born in Aberdeen, Washington into a large Croatian, blue-collar family. All six of my six uncles served in World War II and my dad was a carpenter.

We moved to California shortly after I was born. And it was there my dad taught me not only his craft but the value of hard work. These are lessons I carried with me as I accepted Christ in my late teens and eventually went onto a 30+ year career in Christian ministries. Upon graduation from Westmont College, I joined the Young Life staff.

By the time I moved on, I was the Senior Vice President in charge of the Western United States, Soviet Union, Asia, and Australia. In 2001, I became the first Chief Operating Officer of an emerging NGO called International Justice Mission (IJM). Headquartered in Washington, DC, the nonprofit worked around the world to free people from slavery.

And in the final 12 years of my career, I served as the CEO of CRISTA Ministries in Seattle, Washington. And all the while, I’ve been supported by my loving wife, Kathleen, our four amazon sons, and their wonderful families.

Today, I’m helping mentor future leaders like you grow with purpose and integrity.

In writing this book, I’ve come to appreciate the fact that each of us, no matter our age, is living out an unfinished story of what God is still doing.

Live Large! is meant to share where I've come from, where I'm going, and how you can make positive steps in your own story of following Jesus.

Are you leading a small group? When you buy 4 or more copies of the paperback edition, you can save 15% on your order with code: 4SMALLGROUPS

Order for Your Group